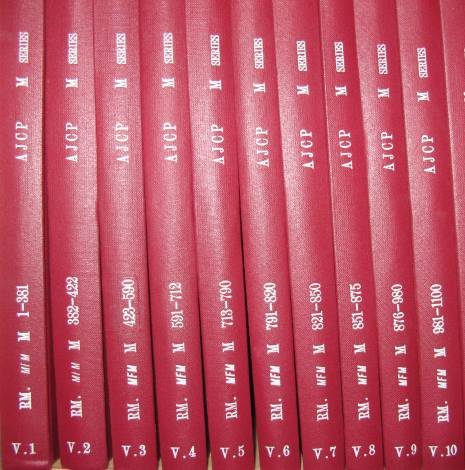 Descriptive lists of M Series records are contained in 35 bound volumes and are available for consultation in the Newspapers and Family History zone. In a number of cases the online versions of lists contain more detail than those in the printed volumes.

For purposes of arrangement and description the AJCP film is divided into two series: the Public Record Office Series and the Miscellaneous Series.

Archives and manuscripts filmed as part of the Miscellaneous Series range from those held in the British Library and the National Libraries of Wales, Scotland and Ireland to material in university libraries, county record offices, museums, religious archives, learned societies, business archives and private homes. Although private records predominate, the Miscellaneous Series encompasses some official records, including selections from the archives of the Hydrographic Office, the Post Office and the Ministry of Defence. There is also, anomalously, a small amount of film acquired from the Public Record Office. In addition, local government records, mostly relating to convict transportation, were filmed in several county and city record offices.

The great strength of the Miscellaneous Series is in material dating from the nineteenth century. This applies in particular to emigrant diaries and letters, convict records, the archives of missionary societies, scientific records and the papers of politicians and officials. Eighteenth-century material consists mainly of maritime records, including logs and journals of most of the early British explorers in the Pacific. Despite weakening links between Britain and its Pacific colonies, twentieth-century material is far from negligible and includes important sources on imperial relations, migration, trade, public finance, business, wars and defence, and scientific research.

The AJCP staff searched for Australian and Pacific records throughout England and Scotland. The wide coverage is apparent from the list of repositories on pages xii-xix in the handbook. In Wales and Northern Ireland filming was largely confined to the National Library of Wales and the Public Record Office of Northern Ireland. In Ireland the collections searched and filmed were mostly held in repositories in Dublin. No searching was undertaken outside Britain and Ireland. The Miscellaneous Series, however, incorporates a few European collections, especially German official records, which were acquired from various sources.

Most of the records filmed are held in repositories which, whether public or private, are in varying degrees open to the public. The remainder are personal papers which are in the possession of individuals or families. They range from the papers of well-known explorers and governors to letters and diaries sent back to Britain by ordinary emigrants and travellers.

Brief descriptive entries for each of the records filmed as part of the Miscellaneous Series can be viewed in Part 8 of the Handbook.

A digitised copy of Part 8 of the Handbook is available online.

Brief descriptive entries for each of the records filmed as part of the Miscellaneous Series can be viewed in Part 8 of the Handbook. In addition to the Handbook the Library holds descriptive lists of the content of each entry. These lists are contained in 35 bound volumes which are available for consultation in the Newspapers and Family History zone.

What other libraries hold copies of the AJCP Miscellaneous Series microfilms? 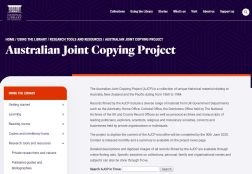 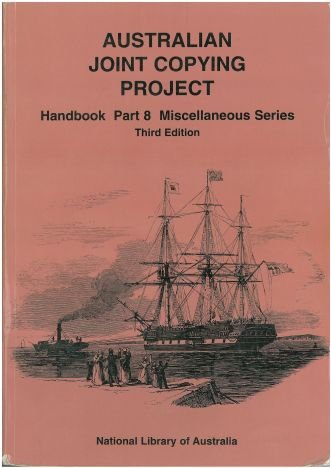