Australian ballot, also called secret ballot, is the system of voting in which voters mark their choices in privacy on uniform ballots printed and distributed by the government or designate their choices by some other secret means.
Victoria and South Australia were the first states to introduce secrecy of the ballot (1856), and for that reason the secret ballot is referred to as the Australian ballot.
The system spread to Europe and the United States to meet the growing public and parliamentary demand for protection of voters.

Australians vote for government representatives at national, state and local levels in a 3 to 4 year cycle. National elections are run by the Australian Electoral Commission.

States and Territories are responsible for elections within their jurisdictions.

What you can find in the Library

To find information about Australian elections, select the ‘Browse subjects’ option and enter subject keywords, including the year of the election if known. Some examples are:

To find information on Australian political parties, use Browse subjects options such as:

The Australian voter : 50 years of change by Ian McAllister (2011). Discussion of Australian attitudes to voting

After the election : what happens? prepared by Leo Hardiman, Damian Page, Leah Edwards (2013). General information and background from the Australian Government Solicitor

From secret ballot to democracy sausage: how Australia got to compulsory voting by Judith Brett (2019)

A question from overseas: I have heard about an Australian law that forces people to vote or they get a fine. Can you supply more details?

Anyone who is unable to provide a valid and sufficient reason to the Divisional Returning Officer for failure to vote at a federal election, and who does not wish to have the matter dealt with by a Magistrates Court may pay a penalty of $20.

If the person refuses to pay the $20 then the matter may be referred to a Magistrates Court, where a fine of $50 plus costs may be ordered on conviction.

On average about 5 per cent of enrolled voters fail to vote. In recent federal elections, with a voter turnout of approximately 95 per cent, informal voting (blank or not properly completed ballots) has accounted for about 5 per cent of all the votes cast (from Our electoral system at DFAT). 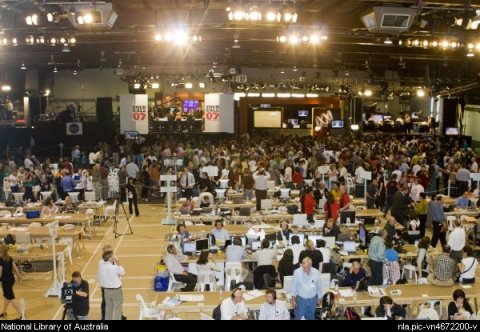 National Tally Room as seen from the second floor of the tally board during the Australian Federal Elections, Canberra, 24 November 2007 [picture] / Mark Arundel

The poll for a national song, held on 21 May 1977 was not a proposal to amend the Constitution, and voting was not compulsory. Details at the AEC Australian Politics and Elections Database from the University of Western Australia