WHERE IS THE ORIGINAL AUSTRALIAN CONSTITUTION?

The Constitution, or an Act to Constitute the Commonwealth of Australia, originated in the British Parliament and was in the custody of the National Archives of the United Kingdom until it was loaned to Australia in 1988.

In 1990 the British Government made a gift of the document to the Australian people. The Prime Minister’s speech at the handover of the Constitution Act can be read online.

The Royal Commission of Assent to the Commonwealth of Australia Constitution Act (UK) is held by the National Archives in Canberra and may be available for viewing at special events and by booked groups.

The online publication Documenting a Democracy has a digitised copy, and you can also read it online at the Australian Parliament House website. 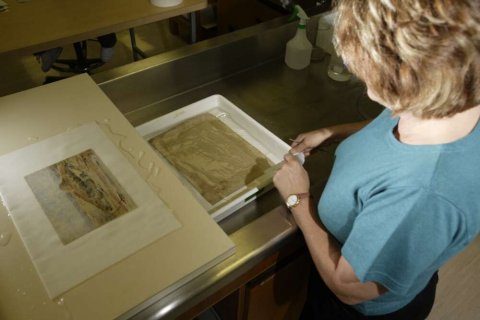 Pryor, Geoff, Bill Hayden climbing a cliff on his quest for the Prime Minister's chair [picture], 1979. 1 drawing : pen, ink and wash on paper

Trove newspapers include early official gazettes, such as The Sydney Gazette and New South Wales Advertiser

The National Library of Australia has very rich collections of historical material supporting the study of Australian politics and government.  Some of these are listed here; Catalogue searches will reveal more, in all formats including Pictures, Manuscripts, Oral Histories and Ephemera.

These and other titles can be requested through the Catalogue. You can also find resources on open access in the Main Reading Room Reference Collection.

The constitution of a federal commonwealth : the making and meaning of the Australian constitution by Nicholas Aroney (2009). Looking at historical, political and legal issues, this book discusses how the Constitution came into being

The Centenary companion to Australian federation by Helen Irving (1999). Looks at the individual colonies as they made their way towards membership of the Australian Commonwealth in 1901.With cross-referenced short alphabetical entries covering key events, people and concepts

Lion and kangaroo : the initiation of Australia by Gavin Souter (2001). A detailed account of the first two decades of the Commonwealth of Australia

Australia and the world : a documentary history from the 1870s to the 1970s compiled by Neville Meaney (1985). Looks at Australia’s foreign relations, attitudes to international affairs and the evolution of foreign policies from colonial times

The Bulletin (1880-1984) was an influential newspaper in Australian culture and politics, especially in the early years of its publication. Also available on microfilm and online (check the dates)

Documenting a Democracy 110 key founding documents, from the Museum of Australian Democracy

Australian Constitution and Federation from the National Archives of Australia

Australian Federation Full-Text Database from the University of Sydney

The Referendums 1898–1900 fact sheet from the Australian Electoral Commission

A researcher would like confirmation on the format and text of the referendum questions actually voted on in each colony in the constitutional referendums of 1898-99 leading to the formation of the Commonwealth of Australia.

Referendums were held in different states between 1898 and 1900. A timeline is given at the archived website, Centenary of Federation 1901-2001.

We can search the Trove newspapers for reports of these, and find the wording of the ballot papers. AustLii also has online copies of the Australasian Federation Enablings Acts for 1895 and 1899, which include the ballot wording.

AUSTRALASIAN FEDERAL CONSTITUTION.
Ballot Paper.
Are you in favour of the proposed Federal Constitution Bill?

See the Zeehan and Dundas Herald of 31 May 1898 and other 1898 newspapers for reports of this. The Library has a How to vote poster for the Yes campaign showing this wording.

In NSW, while the majority voted yes, it was not sufficient to pass the mandated 80,000 approval mark for that colony.

January 1899 - Premiers agreed to amend the Federal Constitution Bill to meet the concerns of QLD and NSW.

April/September 1899 – Referendums were held, with the wording ‘Are you in favour of the proposed Federal Constitution Bill as amended?’ An example can be seen in the Western Champion of 3 March 1899. The State Library of NSW has a copy of the ballot sheet for NSW. All colonies that took part passed the referendum this time around.

July 1900 – A referendum was held in Western Australia. The same wording was used, as seen in the Australasian Federation Enabling Act (Western Australia), found online at AustLii. 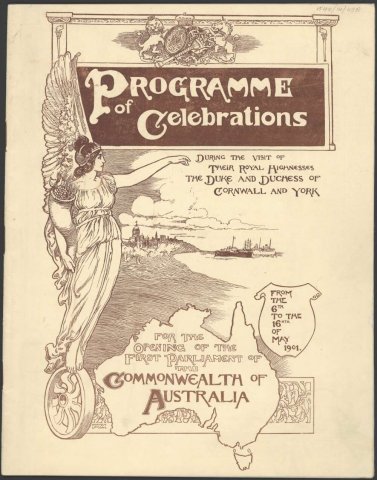 Official programme of functions and displays to celebrate the opening of the first Parliament of the Commonwealth of Australia by His Royal Highness the Duke of Cornwall and York, at Melbourne. MS 1540, Papers of Alfred Deakin, 1804-1973, Item 14/438

The Biographical Dictionary of the Australian Senate, Ann Millar (ed) (2000). A biographical account of senators and history of the Senate.  Entries are arranged according to the state each senator represented. RF 328.94092 B615

The Museum of Australian Democracy at Old Parliament House (MoAD)