A daily collation of press statements by Federal Government ministers and the leaders of opposition parties. Includes press releases, speeches, grants made, major contracts let and appointments of government agencies. (Request through the catalogue)

This collection of transcripts from Australian Prime Ministers contains approximately 20,000 individual speeches, media releases and other transcript items dating from the early 1940's.

Making Laws describes the passage of a bill through federal Parliament.

Parliamentary committees gives information about the committee system and lists the current and former Senate, House and Joint Committees

What does the Library hold?

The National Library collects government publications, general works, manuscripts and other material can be accessed through the Catalogue.  Items include:

Browse the catalogue for portraits of politicians; search for ‘federal politicians’ and limit to ‘Occupation’ and ‘Picture’ to see these results. You can also search for names and events, limiting the results to ‘Picture’.

Available on open access in the Main Reading Room

Odgers’ Australian Senate Practice 1953+
Explanation of the laws and practices of the Senate including: its constitutional role, parliamentary privilege, elections, officers, motions and amendments, debate, legislation, committees and relations with the Executive Government and the judiciary.
Call number: NLq 328.9405 ODG; latest issue in the Main Reading Room Reference Collection

GovPubs has a description of each type of publication, and what you can expect to find in the documents. It also includes information about changes in titles, dates of publications and available indexes.

Use the Browse by Publication function to find Government publications in National, State and Territory libraries and online.

Committee reports are bound with Parliamentary papers, or you can search for reports by committee name in the Catalogue, for example, Final report / Select Committee on the National Broadband Network

A researcher is looking for the 1993 Australian Labor Party election proposal which contains details about the proposed dental reform for low income earners and pensioners.

Media releases (including speeches) can be found in the Ministerial document service: daily collation of Ministers' and Opposition Leaders' statements. We can check January to March 1993, leading up to the election.

Nothing in the monthly indexes specifically mentions the Dental Reform program; however the election statements by the Prime Minister (Paul Keating) and by the Deputy Prime Minister and Minister for Health (Brian Howe) are included.

The earliest speech which mentions the Dental Reform Program is from Brian Howe, in a speech in Port Macquarie on the "Fight for Medicare" (Page 6660 of the Nos. 139 - 156 Ministerial Document Service volume) on 24 February:

"Today the Prime Minister announced initiatives which extend the caring arm of Medicare.

"First, a public dental scheme for those people who really need it. All health card holders - that is two million Australians - will now be eligible for free dental services".

The Prime Minister's speech is not in this volume, but can be accessed online at The Museum of Australian Democracy, Old Parliament House. This is also dated 24th February 1993. However, no details are given, just the general outline:

"A new Commonwealth dental health program will be established for emergency and basic dental care for health card holders."

The Parliament of Australia website has published a research paper on dental health in Australia. See under "Commonwealth Dental Health Program" for more references. 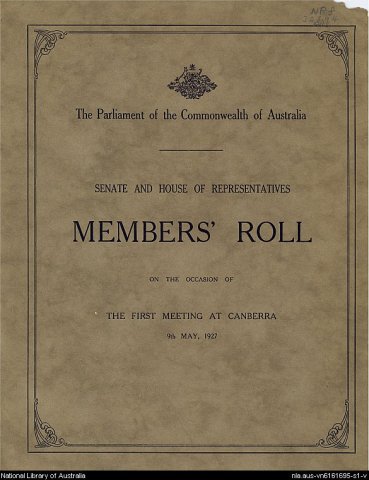 The AGWA service is now integrated into the Library's single discovery service, Trove, and can be accessed through the Websites category.

From 1960 until 1992 the Library maintained newspaper clipping files containing articles from major Australian metropolitan newspapers. Many of these clippings files, including those relating to Australian politics and government, have been catalogued and are available to request online. For an overview of what is available please refer to our page on Clippings.

Useful collections of newspaper cuttings to support research into Australian politics and government include:

Biographical files on parliamentarians are also available, such as:

There are also some bound volumes of newspaper clippings that have been compiled to cover certain major periods, such as: