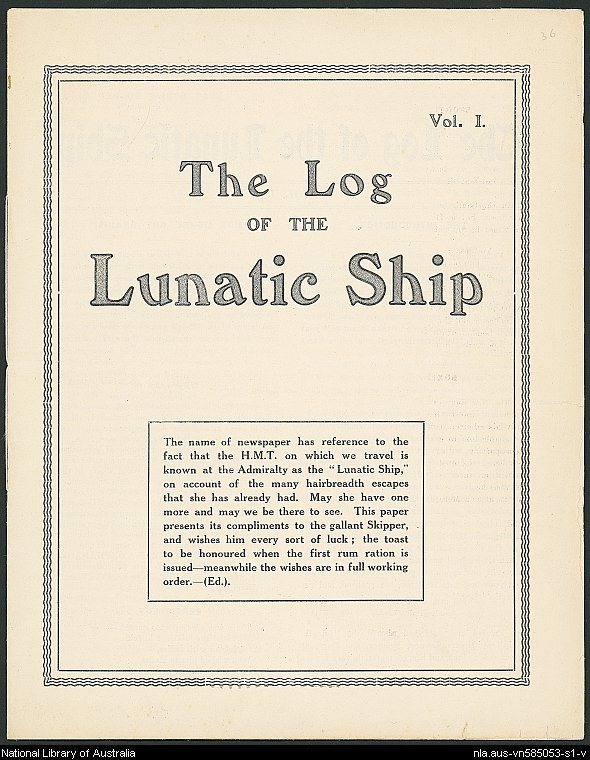 Biographical cuttings files contain newspaper articles about a specific person. Articles in these files were collected from the late 1960s until 2000.

The contents of these files are not available online however the files may be requested via the online catalogue.  Files may be found by searching for the person's name eg Biographical cuttings on Field Marshall Sir Thomas Blamey.

Newspapers provide an invaluable resource for researching World War I and the National Library holds the largest collection of Australian and overseas newspapers in Australia in both print and digital formats.

A range of Australian newspapers published during the World War I period can also be accessed online via the Trove digitised newspapers service.

Newspapers may be found in the online catalogue using the Browse Subjects option in the catalogue.  Use the name of the town followed by the subdivision 'Newspapers'.

You can also search by title for the name of the newspaper.  For example:

In addition to browsing subject headings or using the titles of newspapers you can use different keywords alone or combined to identify a wide variety of newspaper related items. The following are some examples that can be used:

Results of such searches may reveal publications online, in other digital format (CD-ROM), on microform or in print.

A wide variety of Australian and international newspapers from the First World War period can be accessed online via our eResources portal.  These are available as free internet resources or online subscription databases. Use the 'Browse eResources' tab to find useful titles including the following:

A range of historic Australian newspapers can be freely accessed online via the Trove digitised newspapers service.

The magazines and newspapers produced by soldiers of the AIF provide a larrikin view of life as well providing insight into the conditions under which they served.  Some were produced on board ship (and bore their name such as The Ascanian) when the soldiers were leaving Australia, and include original writings, poetry and descriptive travel information on the various ports stopped at the sights seen by the men, many of whom were leaving Australia for the first time.  Useful subject headings to locate this material include:

The Digitised World War I Victorian newspapers page at the State Library of Victoria contains useful information about Victorian community newspapers which have been digitised and made available via the Trove digitised newspapers service.